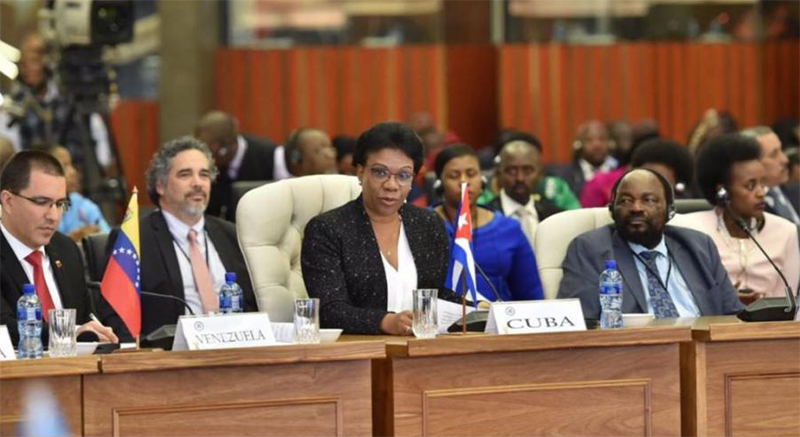 In the morning working session, the Cuban Vice President also held numerous bilateral exchanges, including talks with the Minister of the Presidency of South Africa, the Presidents of Namibia, Zimbabwe, Uganda and the Sahrawi Arab Democratic Republic; the Prime Minister of Lesotho; the Vice Presidents of Angola and Seychelles; and the Foreign Ministers of Namibia, South Africa and Venezuela, according to the cubaminrex web portal.

The Conference was marked by pronouncements of solidarity with the Sahrawi Arab Democratic Republic (SADR) by the Heads of State and Government and heads of delegation of the participating countries; as well as by expressions of recognition to Cuba for the role played in the struggles for the liberation of Africa and for its decisive participation in the battle of Cuito Cuanavale.

In recognition of the victory in that contest, the SADC (a community of 16 countries in that geographical area) agreed last year to declare March 23rd as the day of the liberation of Southern Africa.

In her speech at the Conference, Inés María Chapman ratified Cuba's position of "invariable solidarity with the Saharawi people, and support for the search for a definitive answer to the question of Western Sahara that will allow it to exercise its right to self-determination and to live in peace in its territory".

The Vice President's words caused a great impact among the delegates present, and one of the most emotional moments of her speech was the mention that 2,046 SADR students graduated from Cuban institutions of the Ministry of Public Health and the Ministry of Higher Education; information that was received with ovations of recognition, according to cubaminrex.

She also pointed out that the modest contribution to the development of the Saharawi people that Cuba has been making since 1976 includes a Medical Brigade and another one of teachers who work in the Tindouf camps.

For almost six decades, the Saharawi people has been denied the inalienable right to self-determination, enshrined in resolution 1514 (XV) of the General Assembly of the United Nations, Chapman recalled, the SADR proclaimed in 1976 was immediately recognized by 46 countries and in 1982 was admitted with full rights by the then Organization of African Unity (OAU).

Today it is a full member of the African Union and is recognized by more than 80 States, and dozens of UN resolutions (Security Council and General Assembly alike) in favor of a definitive solution for this people have not been complied with.

Chapman emphasized in her speech Cuba's position that it is imperative that the international community commit to the implementation of all resolutions and decisions adopted by the UN on Western Sahara, including the strengthening of measures against the illegal exploitation of its natural resources.

Together, they cover an area of 554,919 square kilometers and have an estimated population of 277 million people.