Diaz-Canel urges to keep the pace in Havana recovery Cuban President Miguel Diaz-Canel Bermudez urged the Council of Ministers meeting on Wednesday not to lose the pace achieved in the recovery of Havana municipalities affected by the tornado that hit the city on January 27.

After the constitutional referendum of February 24, it is necessary to continue working with the same intensity until we solve all the problems, he said, because the humanist essence of the Revolution is not to leave anyone abandoned. In addition, he said, we have to move forward with the program for the 500th anniversary of Havana.

Diaz-Canel said he will ensure that there is no lack of resources for recovery and continue to ensure the orderly delivery of donations. On this last issue it was announced that new donations have been received from Bolivia, the International Red Cross and the United Nations system.

The Chief of Staff of the National Civil Defense, two star general ® Ramon Pardo Guerra, stressed that 24 days after the tornado is appreciated that recovery has gained in organization and vital systems, such as safe water, health, electricity, communications and food supply, are virtually restored.

After the event, he pointed out, some 640 shelters are maintained, which are included in the category of assisted by the State because they lost all their material belongings.

He considered that in the processing offices there is less concentration of people and the points of sale of construction materials are supplied, although at certain times of the day some products may be missing. 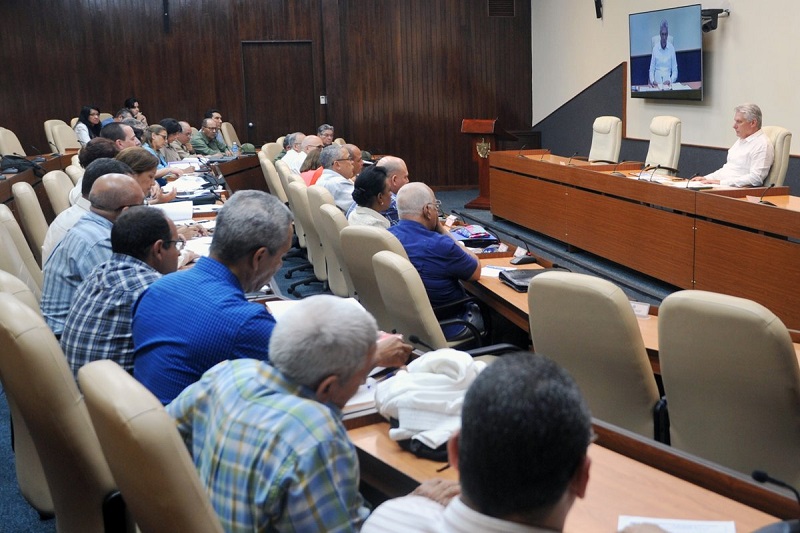 It was reported in the meeting that of 7,923 affectations in the houses some 2,480 have been totally resolved. To date there are 752 total collapses and 22 have been resolved. The Minister of Construction, René Mesa Villafaña, explained that around 4,000 builders from various agencies are working today on the recovery of the damaged houses.

The vice-president of the OSDE of the Ministry of Construction, Norberto Pérez, announced that a strategy has been drawn up to deal with the construction of houses due to total landslides, which includes the definition of remaking 459 in the same place where they were, locating 72 in new sites and 273 in adapted premises. Finally, 804 houses will be rehabilitated -52 more than the total collapses caused by the tornado - since some families lived in overcrowding.

Each one of them, detailed the director of the Ministry of Construction, has identified its builder and completion schedule. To date, 689 are in execution and another 115 are due to begin in the next few days.

The president of the government in the capital Reynaldo García Zapata commented that the resources for reconstruction have been secured and 90% of the victims have already bought the resources they need. In this regard, the first secretary of the Party in Havana, Luis Antonio Torres Iríbar, noted that the search continues for premises to adapt them as housing, which may also benefit those who remain sheltered by previous weather events or by the deterioration of their homes.

In addition, the president of the Institute of Hydraulic Resources, Antonio Rodriguez Rodriguez, announced that the hydraulic installation of 135 buildings has been resolved and work is being done on another 24.

The Minister of Finance and Prices, Meisi Bolaños Weiss, said that in the coming days should conclude the work in the processing offices, provided that it is certain that there are no victims without a technical record to purchase construction materials.

At the same time, some measures are being evaluated to favor the payment of taxes to some thirty taxpayers who were affected in the exercise of their work and, therefore, in the generation of income.