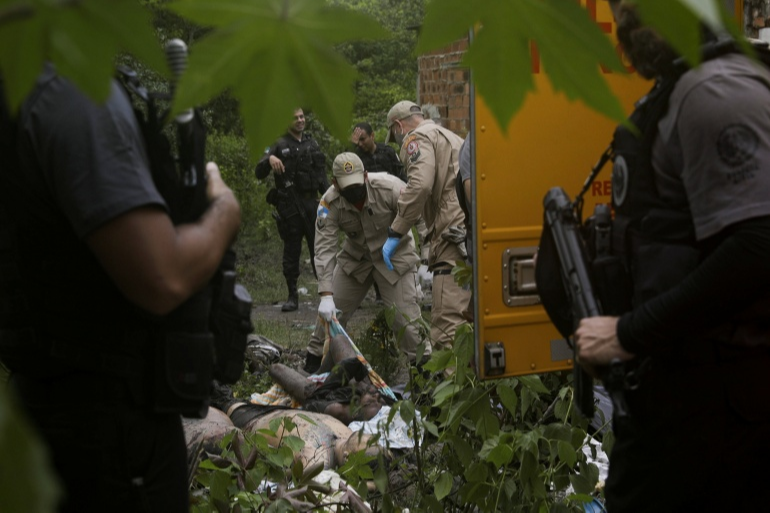 At least eight bodies, including some showing signs of torture, have been found in a mangrove swamp outside of Rio de Janeiro, Brazil following a gun battle involving police.

Rio de Janeiro state police said officers were investigating the grisly scene alongside forensics experts in the poor favela neighbourhood of Salgueiro, about 35 kilometres (20 miles) northeast of the beach city.

Residents, who declined to be named, told Brazilian media outlets that they expect more bodies will turn up following an “intense” gun battle in the community.  “The bodies were all thrown in the mangrove swamp. They had signs of torture, people tossed one on top of the other. It has all the signs of a massacre,” a witness told Brazil’s Globo TV on Monday.

The station, one of Brazil’s most popular networks, showed rolling images of unidentified cadavers draped in white sheets at the edge of the swamp.

Police said clashes first erupted in the area on Saturday when a police sergeant on patrol was killed in an attack. Rio’s Police Special Operations Battalion, or BOPE, then launched a raid on Sunday.

Rights groups regularly accuse the elite force of indiscriminate killing and excessive violence in its hard-hitting operations against drug gangs in the favelas.  “The BOPE executed an operation in Salgueiro Sunday after receiving information that one of the individuals involved in Saturday’s attack was believed to be wounded and hiding in the area,” police said.  “The team came under attack near a mangrove swamp, leading to an intense confrontation.”

Rio’s military police did not respond to the locals’ accusations of officers being involved in torture or multiple killings.   They claimed they entered the region to “stabilise” it after violence from alleged drug gangs.

Police said they seized two pistols, ammunition, more than 800 bricks of cannabis and more than 3,000 packets of a substance resembling crack cocaine in the raid.  The killings in Salgueiro were one of at least 58 shooting incidents with three or more victims so far this year in Rio state, said rights group Fogo Cruzado.  Of these, 43 were during police operations, it said.

In May, a bloody raid targeting accused drug traffickers in the favela of Jacarezinho left 28 people dead. Rights groups accused police of carrying out “summary executions” during that operation.