Chaos and violence as crowds keep growing outside Kabul airport 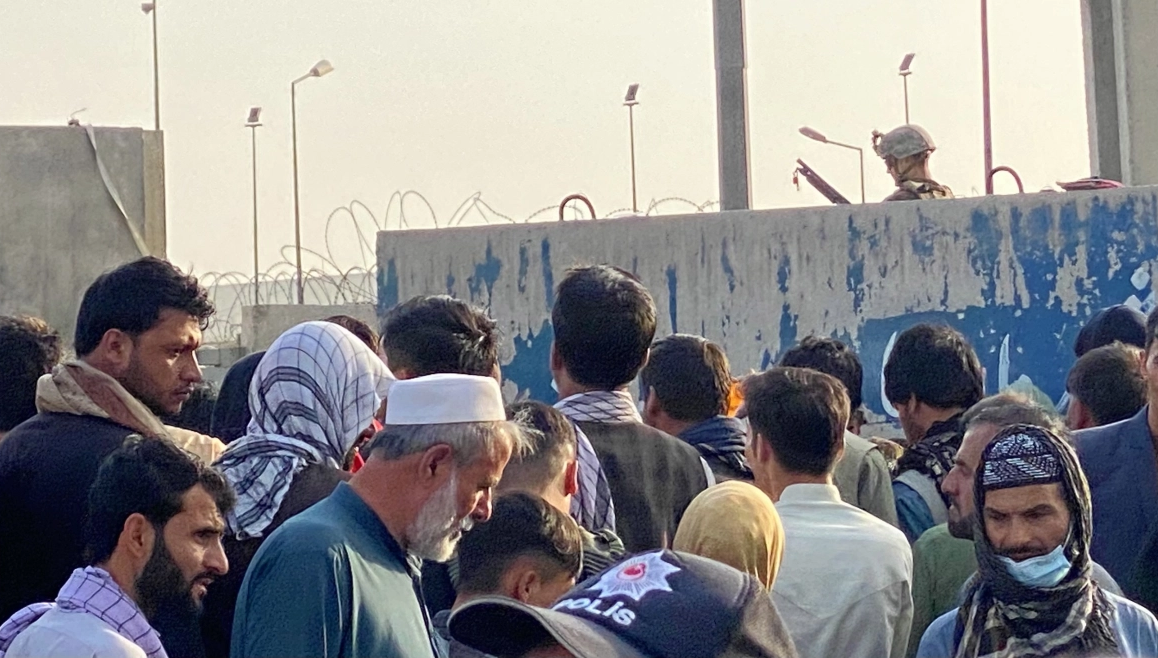 The crowds outside Kabul’s Hamid Karzai International Airport continue to grow with each passing day of Taliban rule.

What was initially a few hundred families outside the roundabout leading to the main entrance in the days since the Taliban first took over the city on August 15 has now ballooned to thousands of desperate men, women and children squatting around a rundown filling station, dirt fields, small patches of grass and nearly any other expanse of land near the gates leading to the non-civilian areas of the airport.

Control of the road leading to the north gate of the airport is divided between the Taliban, which mainly patrols the roads, the last remaining members of CIA-backed Afghan intelligence forces, and foreign troops that are guarding the mammoth gate.

The dusty road is congested with cars and rickshaws trying to get as close to the actual gate as possible, and people. Endless streams of civilians desperately trying to appeal to the US-supported forces that were known for their brutal night-time raids on people’s homes, the Taliban and foreign troops who sit high atop giant concrete walls.

Most questions to the Afghan forces or Taliban are not met with answers, but blunt force.  The Taliban has reportedly blocked people from reaching the airport and has fired in the air and used batons to force people to form queues outside the airport.

The men and women that approach the Afghan forces in camouflaged uniforms are also violently pushed back.  Some raise their guns into the air and begin to fire round after round of aerial shots to disperse the crowds.  These forces are said to be still under the thumb of the United States.

Others, including one overly-eager young man with a red bandana across his forehead, brandish yellow plastic pipes that they use to hit people who get too close or stick around for too long.

When a group of men approach and ask where to go, they are brusquely told: “Keep going to the gate.”   “We did, they told us to come back here,” they replied, echoing the confusion and disorganisation that has plagued countless people in this area of the capital.

All of the people Al Jazeera spoke to said they had been constantly shuffled from one location to another, only to be met with physical violence and aerial gunfire as they go back and forth in the summer sun.

The crowds have grown so big that several square kilometres of the area between the Ministry of Interior and the airport’s entrance gates have started to resemble refugee camps.

The masses of people have also attracted their own economy, as carts, vans and ice cream trucks sell everything from cold water and sodas to 50 Afghani ($0.58) palow, a rice dish, and 10 Afghani ($0.12) bolani – vegan flatbread stuffed with leeks and potatoes.

Sherzai is one such seller. Over the last five days, the middle-aged man has turned his van into a mobile store catering to the hungry, tired crowds of people. But he says as the numbers of people increase, so do the intrepid sellers.

“Before it was only a few of us, now it’s become a mini Mandawi,” he says referring to the capital’s largest open-air market.

Sherzai and several other sellers told Al Jazeera there was heavy gunfire early on Sunday afternoon. Though they could not be sure of what started the firefight, they all said it appeared as if the bullets were fired between foreign and Afghan forces.

At least seven people died in a stampede that day. In total, at least 19 people have been killed at the airport since August 15.  There were reports of gunfire and the killing of at least one Afghan soldier early on Monday morning also, but because the incident occurred near dawn, there were few witnesses. Sources told Al Jazeera they had heard shooting, but had few details of exactly what transpired.