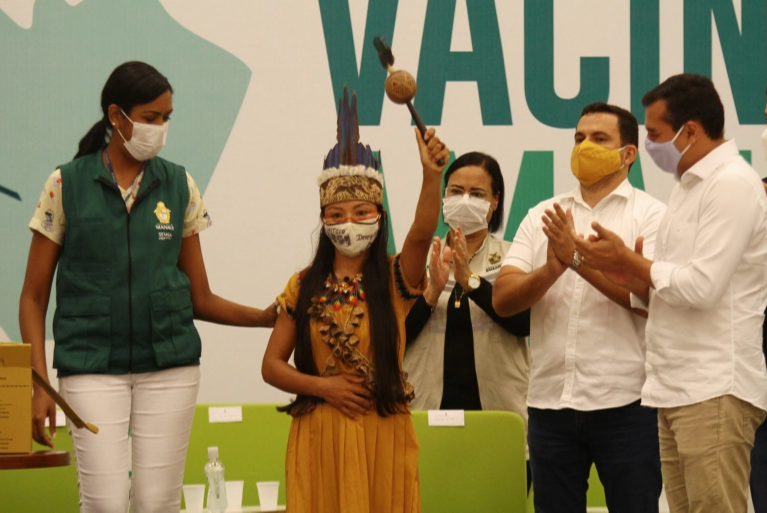 The Brazilian city of Manaus has begun administering vaccinations against COVID-19, providing some hope as the local health system is under severe strain amid a surge in infections and dwindling oxygen supplies.

The Amazonas state government started distributing vaccine doses earlier this week to municipalities, where the priority in the first phase of inoculations will be health workers, elderly people above age 80 and Indigenous people in about 265 villages.

Governor Wilson Lima led a ceremony that kicked off the vaccination campaign on Monday night in Manaus, home to about 2.2 million people and the capital of Amazonas, which received 256,000 initial doses of COVID-19 vaccines.

Vanda Ortega, 33, a member of the Witoto ethnicity and a nurse technician, received the first dose of CoronaVac, the vaccine developed by Sinovac.  “I want to thank God and our ancestors,” said Ortega, who is also a volunteer nurse in her Indigenous community.

More Brazilian states administered their first COVID-19 inoculations on Tuesday, as the government distributed about six million ready doses of the vaccine from China’s Sinovac after its approval on Sunday for emergency use.  The country also approved Britain’s AstraZeneca vaccine.

Brazil has reported more than 211,000 deaths linked to the novel coronavirus since the pandemic began – the second-highest tally in the world after the United States – and more than 8.57 million COVID-19 cases, according to Johns Hopkins University.  The country’s Amazonas state has been particularly hard hit by a recent surge in infections.

Brazilian Health Minister Eduardo Pazuello said last week that the hospital system in Manaus was collapsing, as health facilities were short-staffed and quickly running out of oxygen.  Amazonas has recorded at least 232,000 cases of COVID-19 since the start of the pandemic, according to official figures.

Hospitals in Manaus have admitted few new COVID-19 patients, causing many to suffer from the disease at home and some to die.  Many doctors have had to choose which COVID-19 patients will get oxygen, while desperate family members searched for oxygen tanks for their loved-ones.

The city is receiving an average of four Brazilian air force flights per day to bolster oxygen stocks, along with one shipment per day from the city of Belem near the mouth of the Amazon river, according to officials.