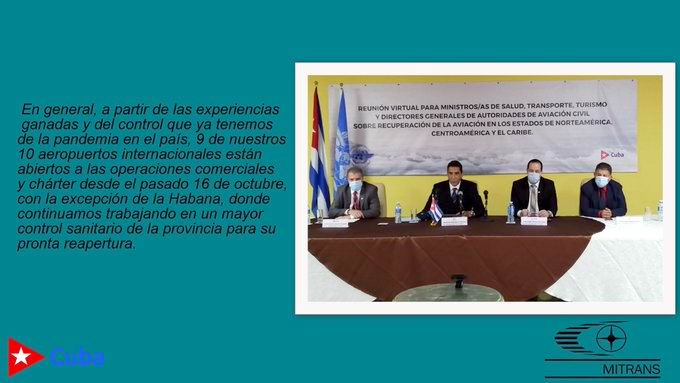 Cuba has developed a protocol for sanitary control aimed at the restart of aeronautical activities, in compliance with instructions of the Government, the Ministry of Public Health, the working group of the International Civil Aviation Organization (ICAO) for the recovery of aviation,  and the World Health Organization.

This was addressed Wednesday during a virtual meeting of ministers of health, transport, tourism, and general directors of civil aviation authorities on aviation recovery in the states of North America, Central America, and the Caribbean.

Rodríguez Dávila pointed out that through this protocol, the health and security measures to be complied with in airports, domestic airlines and cargo entities, among others, have been made compatible, going through a certification process to respond to the public trust and the safe restart of air transportation.

He added that with the reopening of the tourist hubs in the country to foreign markets, all the required biosecurity protocols were established to offer high satisfaction to tourists in the upcoming high season in the so-called leisure industry.

Likewise, he pointed out that nine of the ten international airports of the Island are open to commercial and charter operations since last October 16, except Havana, where they are working on greater sanitary control of the province for its immediate opening.

Rodríguez Dávila mentioned that the new regulations of the US Treasury Department further restrict travel and tourism companies, subject to US jurisdiction, to carry out activities in Cuba, in addition to the constant siege for preventing the normal development of operations and transactions of Cuban aviation companies.

"As long as these measures continue to grow, we will never be on an equal footing, but neither will they prevent us from continuing to develop international cooperation and solidarity," he said.

The Minister of Transport reiterated Cuba's commitment to continue working to efficiently and safely take-off the civil air sector from and to the country, complying with the standards recommended by the ICAO.