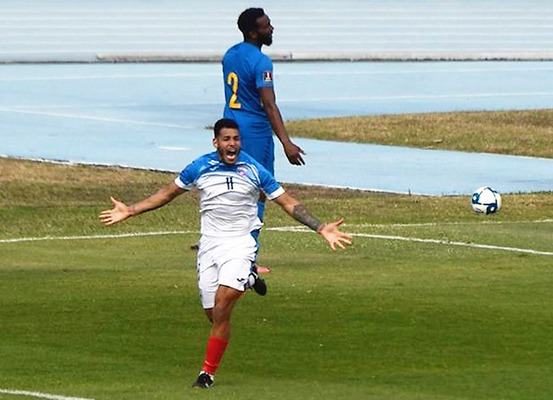 The Cuban national soccer team makes its debut on Thursday as a visitor against Guadeloupe in the CONCACAF Nations League.

The team traveled to Guadeloupe on Tuesday with several of its stars who play in foreign leagues, including striker Onel Hernandez, from the strong English league.

"The 23-player squad will return on the 3rd to face Barbados on the 5th at the Antonio Maceo Stadium in Santiago de Cuba, totally renovated thanks to the collaboration of a project being developed by FIFA and the Cuban government," said the president of the Cuban Football Association, Oliet Rodriguez.

"Then, they will travel on the eighth to face Antigua and Barbuda on the ninth, and finally return home to compete on the 12th against Antigua itself. After that, the players will join their clubs," Oliet assured.

The executive added that the goal of Cuba's participation in the Nations League is to move up to the first division of that competition and get closer to qualifying for the Gold Cup.

"The national team is focused on that purpose, also taking into account its second division group, made up of Guadeloupe, Barbados and Antigua and Barbuda. They have many aspirations to demonstrate the work done since 2019, when there was a renewal.

"In addition, the performance is expected to respond to the current needs of Cuban soccer, with an eye on the 2026 World Cup qualifier."

Similarly, Oliet clarified the absence of striker Marcel Hernandez among those called up for the first matches: "He was one of the players called up, his return ticket to Cuba was arranged, but he decided at the last minute not to be with the Cuban national team in this Nations League qualifier. In due time, he will be analyzed".

For his part, Pablo Elier Sánchez, the team's technical director, told the press that "we have a commitment from all points of view, the same with the team, the fans and the whole country.

"The Nations League will show the real state of Cuban soccer, that's why we have prepared ourselves. It is a complete selection, a fusion, composed of the so-called "legionnaires" and nationals. We expect positive results, although it will not be easy, there are teams with a lot of caliber".

Pablo Elier Sanchez specified that there is a pre-selection of about 43 players throughout the country who are eligible and could be called in case of changes, taking into account the opponents.

The player Onel Hernandez, who is in Cuba for the first time after his integration to the Association, said he was very happy. "I was telling my mother before coming, I feel happy to represent Cuba in an international event, besides, my teammates are very well prepared, we are going to play a good role".

In the case of captain Aricheel Hernandez commented that "we have a good team to be the first in this stage of the League. It is a young team despite the fact that there are players with experience. We hope that everything goes as well as possible and we will be happy to play for Cuba".