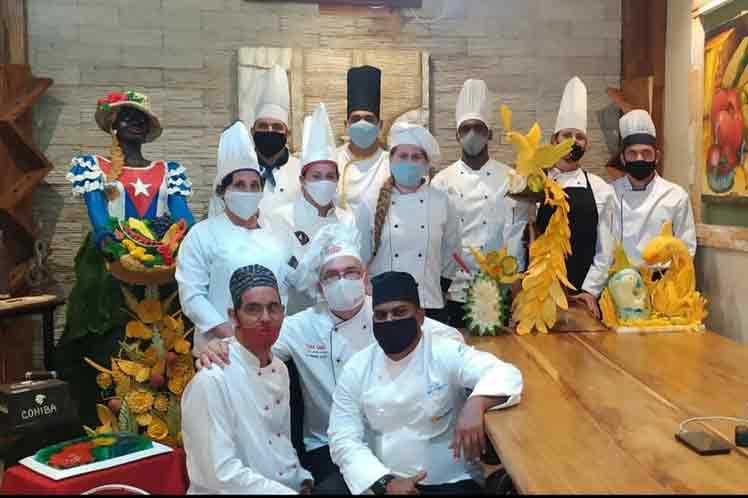 Photo: Courtesy of Adolfo Enrique Espinosa, director of the School of Artistic Cooking

Havana.- The mastery of a Cuban team of chefs in the art of decorating fruits and vegetables is standing out today in the culinary sculptors community, after being granted the honorary prize at the International Competition of Mukimono Art.

The Cuban presentation, which was awarded the prize for the greatest dedication, effort and teamwork, consisted in the reproduction of a life-size work by artist Zaida del Rio, made of chocolate, sugar dough, fondant, marzipan, among other products, entitled Guajira Guantanamera.
According to the director of the School of Artistic Cooking, Adolfo Enrique Espinosa, the piece reflects one of the great constants of that painter, drawer and engraver: the treatment of women as a transmutable being and, in particular, the possibility of becoming a fine, sensual, peaceful and, at the same time, powerful bird.

Likewise, he highlighted the talent of the team of chefs - most from the Gran Caribe hotel group - capable of reproducing relief paintings, which exhibits the works on easels as if they were canvases and sit down to enjoy the reactions of the public.
Among the participants from Argentina, Russia, Spain, Thailand, Peru, Brazil, Chile, Colombia, United States, Canada, and others, the rest of the prizes of the contest were awarded to Benjamin Figueroa, from Mexico; Laura Hernández, from Bolivia and Adriano Cossu, from Italy, in that order.

The School of Artistic Cooking, the first of its kind on the island and founded in 2017, seeks to show that cooking is a complete art, which is why its works have been exhibited at the National Museum of Fine Arts, the Havana International Conference Center, the Colonial Art Museum, among other places.