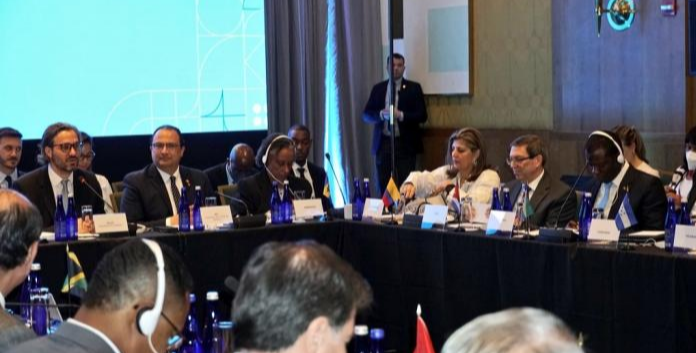 Cuban Foreign Minister Bruno Rodríguez Parrilla reaffirmed in New York the island's commitment to continue contributing to the strengthening of the Community of Latin American and Caribbean States and the Association of Caribbean States, "mechanisms with a valuable contribution to genuine regional integration," he said.

At the meeting with Latin American and Caribbean foreign ministers, the head of the island's diplomacy recalled that Latin America and the Caribbean have much to show the world. The Proclamation of the region as a Zone of Peace makes our peoples proud, is an international benchmark and commits us to continue improving the forms of relations between our countries and the region with the rest of the world.

From that social network, he pointed out that the international community must provide more assistance and cooperation to Haiti to contribute to its recovery, stability and development, in an environment of peace, according to the essential needs of the country and with full respect for its sovereignty and the principle of non-intervention in internal affairs.

Since his arrival in that city last Saturday to take part in the high-level segment of the 77th session of the General Assembly of the multilateral organization, the foreign minister has been carrying out an intense agenda that included contacts with his Chinese counterpart, Wang Yi, and his Honduran counterpart, Enrique Reina.

The Cuban Foreign Minister held similar meetings with his counterparts from the Marshall Islands, Kitlang Kabua, and Hungary, Péter Szijjártó.

This Monday, the top representative of Cuban diplomacy also met with his counterparts from India, Subrahmanyam Jaishankar and Guinea Bissau, Suzi Carla Barbosa