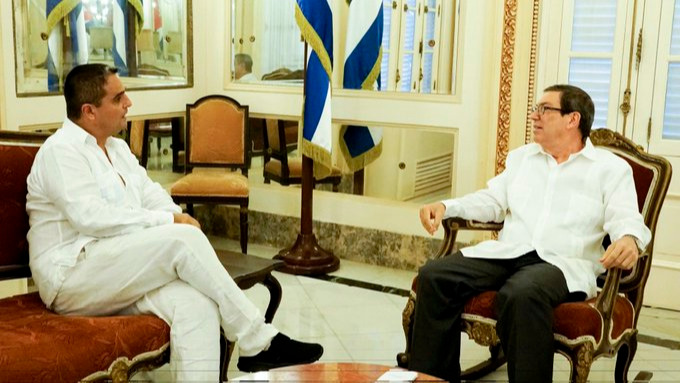 Cuban Foreign Minister Bruno Rodríguez Parrilla received Thursday the ambassador of Spain, Ángel Martín Peccis, to whom he ratified the interest in continuing to develop bilateral political dialogue and economic, trade, and cooperation ties between the two countries.

Rodríguez Parrilla expressed his gratitude for the shipment of medicines and sanitary material to Cuba on the occasion of the severe accident at the Supertanker Base in Matanzas, where a lightning strike caused a violent fire in a fuel tank.

The fire gradually spread to three other tanks in what is described as the most significant event of this type on the island and has left two dead, 14 missings, more than a hundred injured, and substantial material losses.

The Spanish Agency of International Cooperation for Development (AECID) confirmed the shipment of medicines and other health products to Cuba on Thursday.

In a statement, the AECID explained that its Humanitarian Action Office launched a humanitarian operation to send medicines and other products to Cuba to attend to the people affected by the severe fire.

The operation foresees more than 27 tons of aid worth 80 thousand Euros, distributed in two air shipments bound for Cuba.

The source indicated that the first shipment, with more than two tons of the most urgent sanitary material, is scheduled to depart this Friday from Madrid by commercial flight and will be delivered to the Cuban authorities at its destination.

Meanwhile, it added that the second shipment with the rest of the load is scheduled for the end of August.