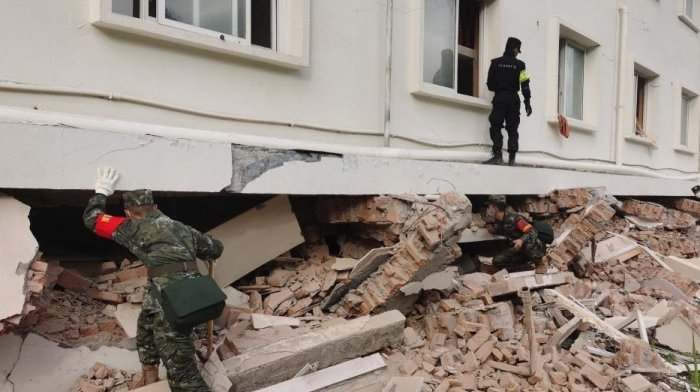 The powerful earthquake that triggered landslides and flattened buildings in the southwestern Chinese province of Sichuan has killed at least 65 people as rescue efforts continue in full swing.

China's state media reported on Tuesday that the 6.8-magnitude earthquake that struck a mountainous area in Luding county in Sichuan province after midday on Monday also injured 250 people, many of them critically, with at least 16 other people still missing.

The quake, with its epicenter deep in the province's mountainous interior in the west, was felt by people in the provinces of Shaanxi and Guizhou, hundreds of kilometers away, according to reports.  Among the worst-hit places is the provincial capital of Chengdu, where 21 million residents continue to be under a COVID-19 lockdown.

According to reports, more than 200 people were still stranded in the popular tourist spot of Hailuogou, with rescuers working on retrieving them.  Efforts are also underway to restore telecommunications services and power and water utilities severely damaged in the quake zone.

The quake destroyed 243 houses and damaged 13,010 others, besides flattening many hotels and homestays, mainly in the historic town of Moxi in the Tibetan autonomous prefecture of Garze, where at least 37 people were killed.

The temblor also inflicted damage to seven small-to-mid-sized hydropower stations and left various highways collapsed.  With heavy rains expected over the next three days, the China Meteorological Administration has warned that landslides could hamper rescue efforts.

In the last two months, the earthquake-prone province of Sichuan has been battling drought and its worst heatwaves in 60 years.  Monday's quake was the biggest to hit the province since August 2017, when a 7.0-magnitude temblor struck the Aba prefecture, north of Luding.

The country's deadliest earthquake in recent years was a 7.9 magnitude jolt in 2008 that killed nearly 90,000 people in Sichuan.