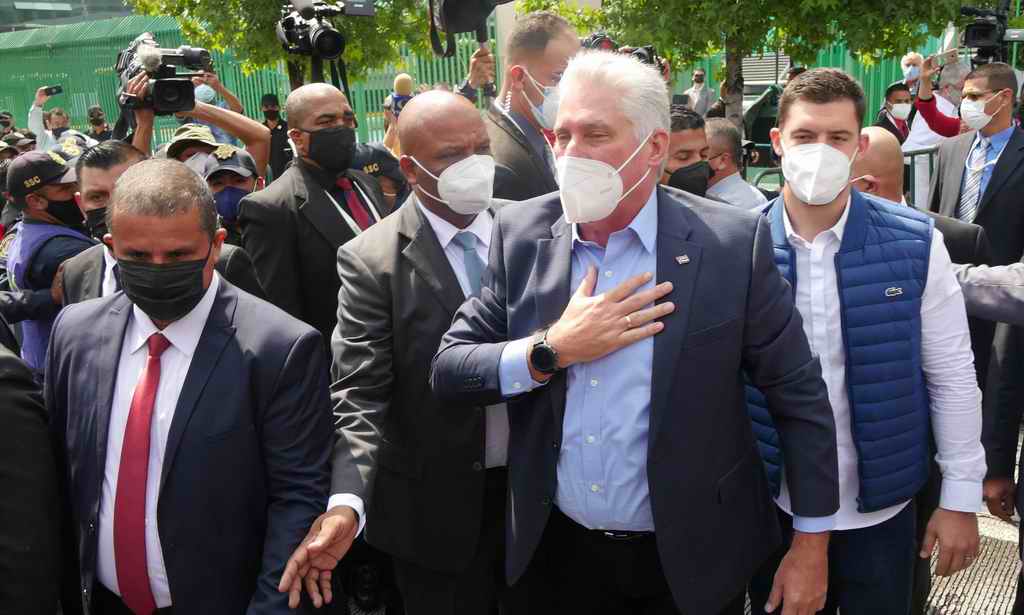 "With meetings like this one and the things that you are doing, and what we are also feeling towards you, the Cuban family and the homeland grow". The First Secretary of the Central Committee of the Cuban Communist Party talked about the meeting with the Cuban residents in Mexico, which is a practice that the Cuban Head of State has systematized during his trips abroad.

The deep roots sustain solidarity, and also multiply it. That is why emotions sprang up, sustained by actions that support many hours of individual and collective efforts and contributions, hundreds of compatriots who love their homeland.

"As for us, it was very important to find a space in the related working agenda in the days that we were going to be here in Mexico to meet precisely with representatives of the Cuban community who live here and this responds to a practice that we have been consolidating, and systematizing since we assumed the presidency of the country as every time that for working reasons we carry out government visit to a nation, we can always have a meeting with the Cuban community abroad, for many reasons",said the president.

"In the first place and to ratify to you, Cuban women and men living in Mexico that the process of dialogue with the Cuban community that began by Commander-in-Chief Fidel Castro Ruz in 1978, is a process that it is unstoppable”, he said.

In his exchange with the representation of Cubans residing in Mexico, the Cuban head of State, referred to the reality that the country is experiencing, and he thanked what was done in support of the medical teams that worked on Mexican soil, while ratifying the commitment to hold the La Nación y la Emigración Conference.

"When we had conditions to hold the conference, and not doing it virtually, but in person, is a commitment that we keep".

The First Secretary of the Party maintained that an immediate challenge is to dismantle the enemy's campaigns on social networks that try to discredit the work carried out by the Cuban Revolution and present Cubans living abroad as a monolithic bloc against their homeland.

"When we know that most of our Cuban community abroad is quite the opposite and you have proven it.”He said.

It is in favor of family reunification, it is interested in the country's development. They want to participate in the development of their country and they want to have a normal relationship with their family, their people, and of course, our Government is determined to provide all those spaces”. He said.

"We have to join, all of us, and we have to provoke more feelings.

They say bad words; we say strong words without fear, and without arguments. We are ready for whatever,” One of the participants said on behalf of his comrades.

There was a special recognition for all Cuban scientific and medical staff who has contributed to achieving our own vaccines, which has given us sovereignty. That is why the approval of the delivery to these compatriots of the "José María Heredia" Distinction was announced by the Association of Cubans residing in Mexico, which will become a reality when the Nation and Emigration Conference could be held.

A significant contribution has been made by the Association of Residents in Mexico by sending donations of supplies, syringes, and expendable material to support the fight against Pandemic, the vaccination campaign in Cuba in particular.

In this regard, the president thanked all the support through the donations, we know that many of those donations have been carried out by people who do not have a broad economic situation, just like you too, as we have asked all Cuba, we have put our heart to Cuba".

Defending Cuba by conviction, wherever there is a patriot, is essential".

"Preserving our historical memory as something important, teaching and knowing our cultural identity to ensure continuity as we must sow love
to defend that Cuban tradition from the Mambises forces until today". María Elena Mora Valiña said.

It was a peak moment, because Marisol Guerra Carvajal, when speaking, spoke vehemently and ended up evoking the lyrics of the song entitled ´Preludio de Girón´ by Silvio Rodríguez and parts of its epic verses:

No one is going to die, less now

It is our cloak.

Nobody is going to die, less now.

The song of the country is our song.

Excited, she concluded by saying: "We all have to put your heart into Cuba."

Outside the premises of the Cuban embassy in Mexico, where the meeting took place, a large group of friends from our country, with flags, slogans and posters supporting our president and the Cuban Revolution, accompanied the celebration of the meeting.

Shortly after the exchange with the representatives of Cubans residing in the Mexican nation had concluded, Miguel Díaz-Canel greeted them in a gesture of gratitude and also for the love for Cuba.

Defending the Homeland, shortening distances, because Cuba is carried in the heart, loved and protected, remained the essence of the meeting in Mexico City, between President Miguel Díaz-Canel Bermúdez with Cubans residing in this nation.

Emotional day before starting this Saturday the Sixth Summit of the Community of Latin American and Caribbean States, CELAC, where Mexico holds the pro-tempore presidency and which should mark the revitalization of that mechanism of comprehensive integration that was created ten years ago, along with the challenge to reach the unity in the diversity.