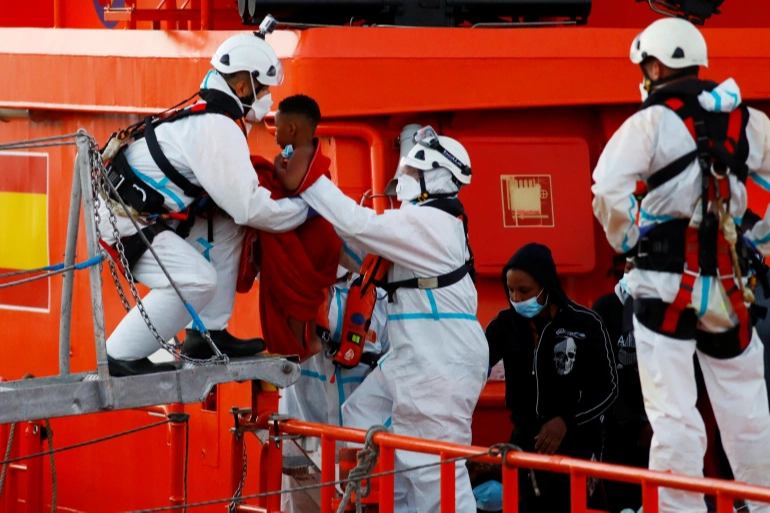 Dozens of African migrants have been rescued off the coast of Spain's Canary Island -- but many passengers suffered from severe hypothermia and others didn't survive the journey.

A two-year-old girl from Mali who had to be resuscitated after being rescued from the packed boat died in a hospital, according to local authorities.

The toddler -- 'Nabody' -- was one of 52 people from sub-Saharan African countries who were found on board a vessel near the island of Gran Canaria, after spending five days in the Atlantic Ocean following their departure from Dakhla on the Western Sahara coast.

The group, which included nine children, was then brought by Spain’s maritime rescue service to the port of Arguineguin.  Rescuers handed the unconscious little girl to a team of Red Cross nurses who worked frantically to revive her on the pavement of the port, images broadcast on Spanish TV showed.

She was then rushed to a hospital in Las Palmas de Gran Canaria, the capital of Gran Canaria, where she died on Sunday, said a spokeswoman for the health department of the regional government of the Atlantic archipelago.

Nabody had been in a critical condition in the hospital’s intensive care unit.  Local media said the girl, who was accompanied in the journey by her mother and older sister, had suffered cardiac arrest during the attempted crossing.  Many other passengers also suffered from severe hypothermia and required hospital care.

The toddler’s dramatic rescue made the front pages of several Spanish newspapers and highlighted the plight of people fleeing violence or seeking better lives in Europe.  “There are no words to describe so much pain.  Heartfelt thanks to those who have fought to the end to save her life,” Spanish Prime Minister Pedro Sanchez tweeted.  “It is a knock on the conscience of all of us.  'Nabody' was only 24 months old.”

The Canary Islands are a key entry point for migrants seeking a better life in Europe.  In 2020, a total of 23,023 migrants landed on the islands, a figure eight times higher than the 2,687 who arrived in 2019. Some 2,600 people have reached the Canaries by boat so far this year.

The effect of the COVID-19 pandemic on tourism and other industries in north and sub-Saharan Africa have pushed many more to embark on the perilous Atlantic crossing.  The numbers also surged after increased patrols along Spain’s southern coast dramatically reduced crossings via the Mediterranean.

At its shortest, the sea crossing to the islands from the Moroccan coast is more than 100km (60 miles), but it is a notoriously dangerous route because of strong currents, while vessels are typically overcrowded and in poor condition.

In 2020, 849 people were reported dead or missing according to the United Nations’ migration agency’s Missing Migrants Project.