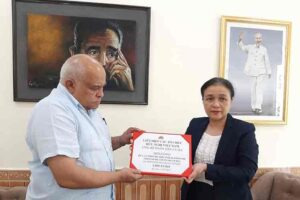 The president of the Union of Vietnam Friendship Organizations (VUFO) and ambassador, Nguyen Phuong Nga, affirmed that the people of Vietnam will always be side by side supporting the Cuban people.

Phuong Nga reaffirmed the position of the VUFO during a meeting with the Cuban ambassador to Hanoi, Orlando Hernandez, whom she visited to deliver a donation from said organization to help compensate for the damage caused by the devastating fire that broke out weeks ago in the supertanker base in the province of Matanzas.

Nga conveyed her condolences to the victims' relatives and expressed her grief for the material and human damage caused by the incident.

She also announced that they are preparing a call so that citizens can contribute to the effort to provide aid to Cuba. She stressed that the Vietnamese people would be side by side supporting their Cuban brethren in the face of adversity.

Hernandez thanked the expressions of solidarity and affection received these days by authorities of Vietnam's Communist Party, the Government, the National Assembly, and different organizations.

He also updated the visitor on the recovery work being carried out in the industrial zone of Matanzas and on the impact caused by the fire.