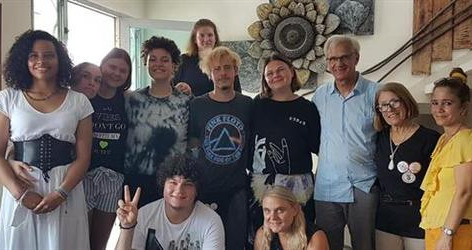 The German solidarity group SJD-Die Falken (The Falcons) ended the day before visiting historical and cultural sites in the central Cuban province of Villa Clara.

Supported by the German Socialist Workers' Youth and its members, they mainly promote activities for children and young people.

During their stay in Villa Clara, since last July 29, the delegation visited, among other sites, the Ernesto Che Guevara memorial that keeps the remains of Che and his comrades of the Latin American guerrilla in Bolivia in 1967.

They also visited the monument to the derailment of the Armored Train by Che's troops during the victorious battle in Santa Clara against the dictatorship of Fulgencio Batista at the end of 1958.

Klaus Schlichting, founder of this project since 2014, told the press that in this opportunity, they again felt wonderful emotions and greatly enjoyed meeting the Cuban people, both in Villa Clara and the provinces of Havana, Pinar del Río, and Matanzas.

He pointed out that the purpose is to add more members to keep the project alive under the protection of friendship and solidarity with Cuba.