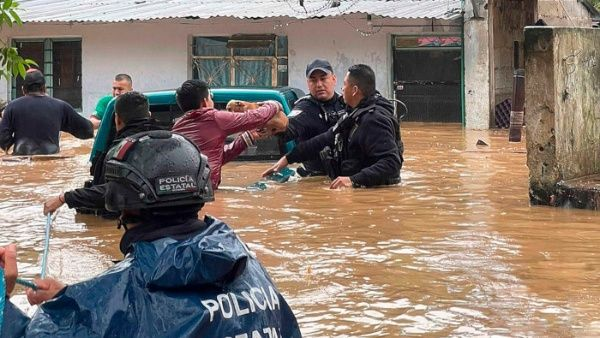 The Government of Veracruz reported that the meteorological phenomenon, which entered the coasts of this eastern state on Saturday as a category 3, caused the death of eight people, among them a woman and her five children when an avalanche buried their house.

Likewise, authorities in the central state of Puebla reported that the cyclone caused three deaths.  "Three fatalities have been recorded, one in the municipality of Huauchinango and two more in Tlaola," said the government of Puebla in a statement, which has already requested assistance from the federal government.

The President of Mexico, Andrés Manuel López Obrador, reported on Monday in his morning conference that he will travel to one of the areas affected by Grace in the state of Veracruz.

"Unfortunately it was not a good weekend, there was damage caused by the hurricane, loss of human lives (...) in Xalapa a family that faced a landslide due to the bad weather and their home was affected, a lady, her children.  And in other places in Veracruz, we are also receiving reports of deaths in Puebla", the President said.

López Obrador stressed that both the government of Veracruz and the Ministry of Defense and the Navy "are taking supplies" to the victims of the hurricane, which after leaving the Pacific Ocean gained strength again and became tropical storm Marty.

"Yesterday (Sunday) in the afternoon a plane with water left for Poza Rica, now another one is being loaded with demijohns for that region and we are going to continue our support. We are going to take a plan of attention to all the victims," he said.