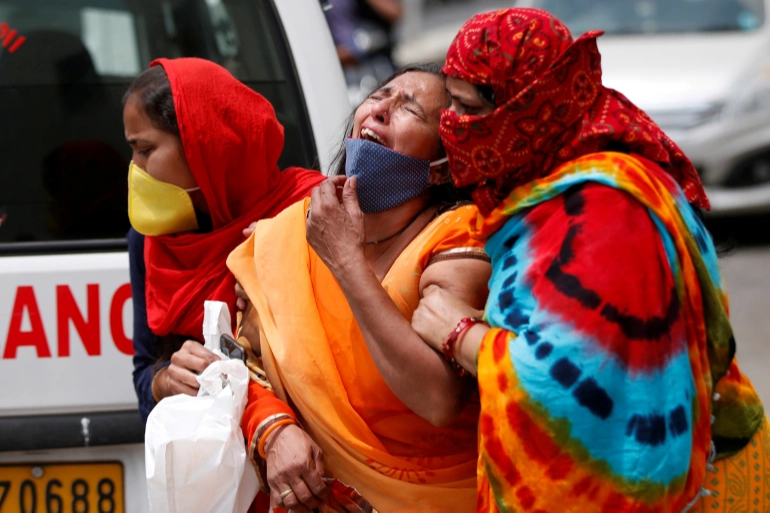 Sunday was the fourth straight day India recorded more than 3,000 deaths as the second wave of the pandemic carries on unabated and keeps setting grim new records.  Altogether 215,542 people have died from COVID-19 in the country.

India recorded its deadliest day of the coronavirus pandemic yet with 3,689 deaths in the last 24 hours.

New Delhi, May 3 (RHC)-- Sunday was the fourth straight day India recorded more than 3,000 deaths as the second wave of the pandemic carries on unabated and keeps setting grim new records.  Altogether 215,542 people have died from COVID-19 in the country.

The number of cases surged to 19.5 million with 392,488 new infections, government data showed. India became the first country to cross 400,000 daily cases on Saturday.  Healthcare systems are overwhelmed and a shortage of medical oxygen has emerged as the most serious challenge.

Thirty-four patients died because of oxygen shortages in hospitals in the capital New Delhi and the states of Andhra Pradesh and Haryana on Saturday, the Times of India reported.   Thirty-one more with COVID-19-like symptoms and “breathing difficulties” died in a hospital in Uttar Pradesh state, the report cited authorities as saying.

Meanwhile, a court in New Delhi said it would start punishing government officials for failing to deliver life-saving items.  The government has been using the railroad, the air force, and the navy to rush oxygen tankers to worst-hit areas where overwhelmed hospitals are unable to cope with an unprecedented surge in patients gasping for air.

But with the government unable to maintain a steady supply of oxygen, several hospital authorities sought a court intervention in the Indian capital where a lockdown has been extended by a week to contain the wave of infections.  “Water has gone above the head.  Enough is enough,” said New Delhi High Court, adding it would start punishing government officials if supplies of oxygen allocated to hospitals were not delivered.

“We can’t have people dying,’’ said Justices Vipin Sanghi and Rekha Patil.  The court said it would start contempt proceedings.

The latest figures came as medical equipment, including oxygen-generation plants, was flown into New Delhi from France and Germany as part of a huge international effort.  “We are here because we are bringing help that … will save lives,” Germany’s Ambassador to India Walter J Lindner said as 120 ventilators arrived late on Saturday.