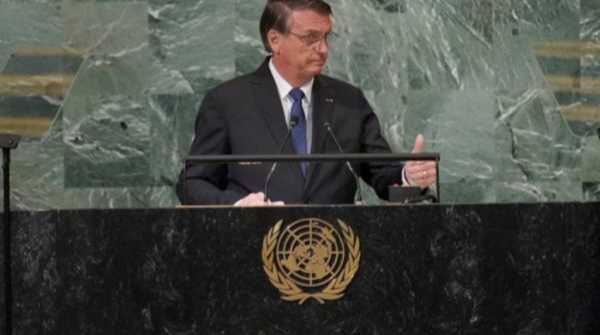 In his speech at the 77th UN General Assembly, Brazilian President Jair Bolsonaro claimed that during his government he has faced "the systematic corruption" of the left, in clear allusion to the former president Luiz Inácio Lula da Silva.

Bolsonaro participated this Tuesday in the opening of the 77th United Nations General Assembly with a speech riddled with lies and with strong political-electoral content.   This could be Brazil's last participation in the event under Bolsonaro, who is second in opinion polls on the race for reelection.

In his speech, Bolsonaro repeated the posture of the last three years, using one of the main spaces of global diplomacy to spread an image of the country that few Brazilians recognize as real.  In addition, he attacked former president and now candidate Lula da Silva, alleging that the Workers' Party (PT) is responsible for corruption in Petrobras and that he has been convicted in three instances.  The former president, however, has accumulated 26 victories in court and has been completely exonerated.

"In my government we uprooted the systemic corruption that existed in the country.  Only between 2003 and 2015, when the left presided over Brazil, the indebtedness of Petrobras due to mismanagement, political subdivision and diversions reached 170 billion dollars."

"The person responsible for this was unanimously convicted in three instances.  The whistleblowers returned a billion dollars and we paid the U.S. stock exchange another billion for the losses of its shareholders.  This is the Brazil of the past," he claimed.

Immersed in scandals in several portfolios of his government, the president has struggled to avoid the label of "corrupt."  However, the interference in investigations against his family, the inappropriate use of the secrecy of public information and the rigging of the State to satisfy the interests of allies point to another reality.

In December 2020, Bolsonaro was named "Person of the Year" for his role in promoting corruption and organized crime by the Organised Crime and Corruption Reporting Project (OCCRP), an international consortium that brings together investigative journalists and independent media centers.

Another of the topics addressed by the president was the pandemic.  According to him, Brazil acted firmly to ensure the vaccination of the population. In reality, however, Bolsonaro's government boycotted the purchase of vaccines, which contributed to the mark of almost 700 thousand deaths from COVID-19.

In an attempt to address the problems for which he is criticized, Bolsonaro also cited the environmental preservation of the Amazon.  However, data from the Deter system of the Instituto de Pesquisas Espaciais (INPE) indicate that deforestation was the highest in the month of August since 2017.