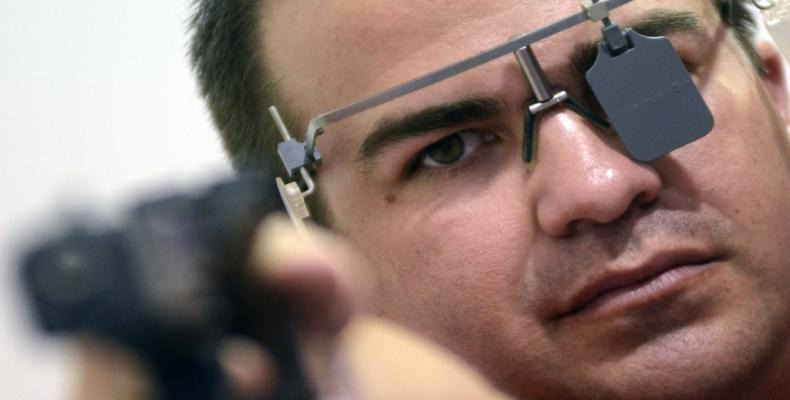 Cuba's Leuris Pupo could continue making history if he qualifies for the Paris 2024 Olympic Games, something very possible taking into account his sporting mastery.

"At least I hope to compete in my seventh and eighth Olympic Games," he told JIT before restarting his preparation this January at the Enrique Borbonet Shooting Range.

"I believe it can be done. First, in the run-up to Paris 2024, thanks to the increase to four of the places to be handed out in the events in the Americas. Then we will see the road to Los Angeles 2028," said the experienced shooter close to turning 45 years old.

His participation in Tokyo 2020, where he won a silver medal in the 25-meter rapid fire pistol, left him with six incursions in these events, equaling in the Cuban summit of this indicator with the shotgunner Guillermo Alfredo Torres.

Both can reach seven editions, although Torres has not qualified for an Olympic Games since London 2012. Pupo, champion in the British capital, has had consecutive victories since Sydney 2000 and has always placed among the top nine, the only one capable in his specialty.

In the history of this discipline, only six men have accumulated seven or more performances under the five rings, a list led by Lithuanian pistol shooter Afanasij Kuzmin (9), Peruvian shot putter Francisco Boza (8) and Slovenian rifleman Rajmond Debevec (8). Among those ahead of Pupo, only Kuwait's Abdullah Alrashidi was also in the Japanese capital for the skeet or shotgun skeet tournament.

Pupo's race for a place in the City of Light will begin at the World Rifle and Pistol Championships in Cairo, Egypt, scheduled for October 12-25. According to the International Shooting Sport Federation (ISSF), the competition will award the first four places in these weapons for the Parisian event.

The second opportunity will come later this year during the Americas Cup scheduled for Lima, Peru, from November 4 to 14, according to the calendar published by the continental confederation.

The 2023 Pan American Games in Santiago, Chile, and that year's world championship in Ignatovo, Moscow region, are also endowed with direct tickets according to ISSF guidelines.

Pupo's performances in the American Cups have been very satisfactory for him, as with his first places in Rio de Janeiro 2010 and Guadalajara 2018 he got access to the summer invitations to London 2012 and Tokyo 2020.

His first Olympic appearance was forged thanks to the gold medal in a World Cup held in 1998 in Buenos Aires. And it was similar on the road to Rio 2016, when he won silver at the World Cup held in Fort Benning, United States, a year earlier.

His first places in the Pan American Games of Santo Domingo 2003 and Rio de Janeiro 2007 gave him the quotas for the Athens 2004 and Beijing 2008 editions.

The ISSF has changed the qualification system for Paris 2024. Now there will only be three competitions with direct quotas, since a pre-Olympic event has been added. The remaining quotas will be sought at continental tournaments. The World Cups will only serve to accumulate points for the ranking, valid to complete the list of 340 qualifiers.