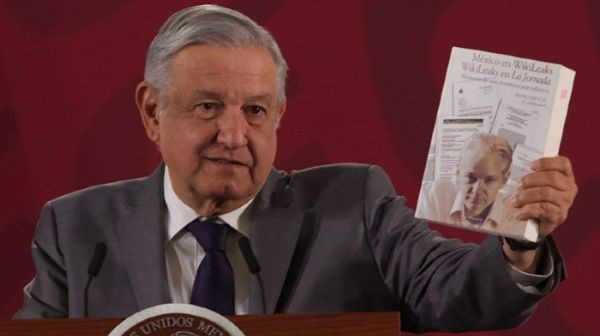 Mexican President Andrés Manuel López Obrador has announced that he will call on his U.S. counterpart, Joe Biden, to drop charges against the founder of WikiLeaks, Julian Assange, who is awaiting extradition to the United States.  If convicted, he could spend the next 175 years in U.S. prisons.

The Mexican president had already advanced his position prior to the visit he will make to the United States in July and in which he will remind his U.S. counterpart that his government had previously granted political asylum to Assange, while he is detained in the United Kingdom.

López Obrador said he will ask for the release of the Australian journalist who is accused of leaking classified information from the U.S. government, which implied the White House's interference in other nations, human rights violations, war crimes, among other crimes against humanity.

In this sense, the Mexican president said: "I would like to state that I will ask President Biden to address this matter.  I am aware that it goes against tough, severe groups that exist in the United States as in all countries, but humanism must also prevail," he commented on Tuesday morning.

As an extension, President López Obrador explained that in case it is decided to release Assange, who is charged with 18 criminal charges, "Mexico opens its doors" and went so far as to describe the founder of Wikileaks as "the best journalist of our time in the world."  And the Mexican leader said that the treatment Assange has received is worse than that of a convicted criminal and all did was "denounce human rights violations."

He also urged the United Nations and all human rights organizations to pronounce themselves on this case.  He explained that "at the end of the Trump administration we requested that he be exonerated, because he is a prisoner of conscience" and showed as proof of his innocence a video released by WikiLeaks in which U.S. Army pilots assassinate a group of innocent journalists in Iraq, as if it were a computer game program.

Last week, the United Kingdom ratified the extradition order to the United States where, if found guilty, he could face a sentence of 175 years in prison.