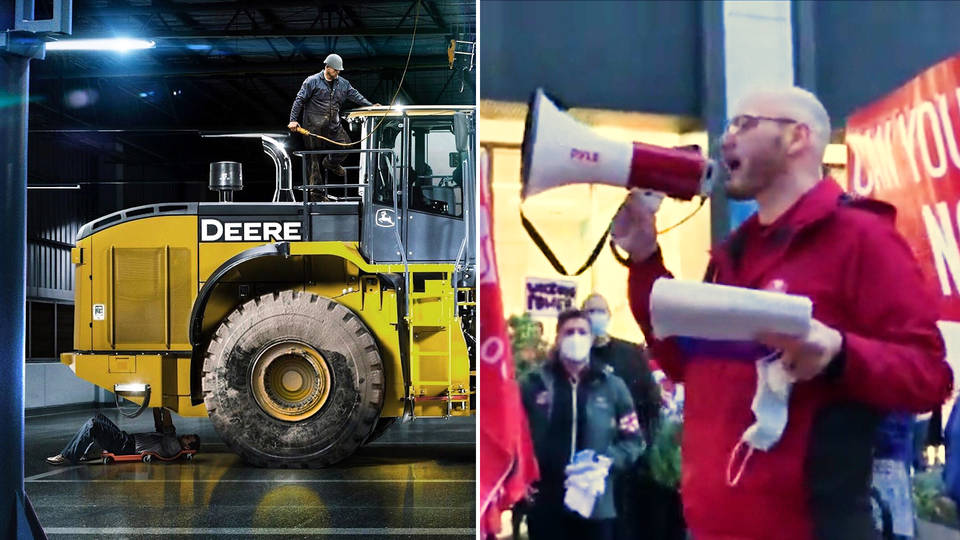 Over 10,000 workers at John Deere farm equipment plants across the U.S. Midwest went on strike at midnight to fight for fair wages, pension benefits for all workers and good working conditions.

Members of the United Auto Workers overwhelmingly rejected a proposed contract and say they will continue bargaining with the company until all their demands are met.

In other labor news, tens of thousands of Kaiser Permanente employees in California and Oregon have voted to authorize a strike amid stalled contract negotiations over pay and working conditions.  Health workers say the pandemic had led to mental health concerns and severe staff shortages.

This comes as some 60,000 film and TV workers with the International Alliance of Theatrical Stage Employees, IATSE, could go on strike starting Monday if no deal is reached in the coming days to address the industry’s low wages and overworking of crews.

Liz Shuler, president of the AFL-CIO, of which IATSE is a member union, told reporters: "We’re fighting for the weekends, as I said earlier.  I mean, it’s 2021, and yet…  And these people are working overtime. They’re answering the call, and yet the companies now, who are making pretty tidy profits, suddenly can’t pay overtime.  And suddenly you can’t have a meal break, and you’re ending your shift on a Friday night and are being called back Saturday morning with less than eight hours of time in between.”

Many are referring to this month as “Striketober” due to the massive wave of work stoppages that are expected or already underway.

Meanwhile, workers at a Dollar Store in Connecticut and multiple Starbucks locations in Buffalo, New York, are organizing to form the first unions at their respective workplaces.  This week Starbucks, announced it is closing two of the Buffalo stores being unionized.  The company called the move a “coincidence.”