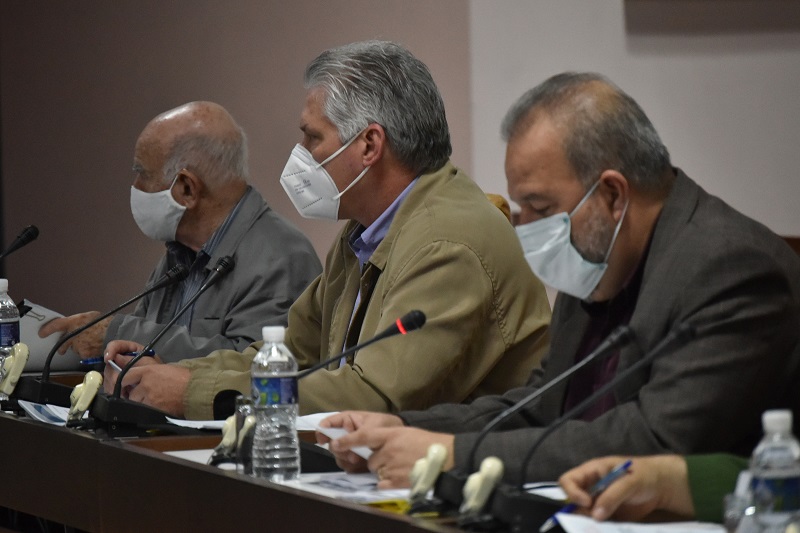 Cuban President Miguel Díaz-Canel Bermúdez, headed in Havana on Monday the first of a cycle of meetings that will take place in coming days with the top authorities in all the provinces and the special municipality of the Isle of Youth.

The measures adopted to face the new rebound of COVID-19 and the Ordering Task's implementation, with special emphasis on the people's dissatisfactions, are the topics to be discussed, reported Granma newspaper.

"We have to work very intelligently and intensely to move on to a better situation," the Cuban President reflected.

How to guarantee the population's demand for food, the confrontation with illegalities, the people's opinions on the measures, and the corrections undertaken were among the subjects discussed.

The Governor of Havana, Reinaldo Garcia Zapata, stated that the decrease in risk perception in the population had led to the new complex scenario of confrontation with the COVID-19.

He said the situation is defined as high epidemiological risk and has its leading causes in travelers' indisciplines; the end of the year's parties; organizational problems, and the non-fulfillment of strict isolation.

"We have to overcome this moment," emphasized President Díaz-Canel, and he expressed all the confidence that Havana can do it.

He highlighted the need to keep alive the economic, productive, and service activities, which implies a much more rigorous work to fulfill the hygienic-sanitary measures defined to avoid infections.

Concerning the problems related to the Ordering Task, the President insisted that this is one of the most wide-ranging and vital political and economic-financial processes undertaken by the Revolution.

He stressed the need to follow with accuracy a group of new problems that have arisen to solve them in the shortest time possible.

And to achieve that, he added, cadres have to play a significant role. They should address inflation and employment problems; make sure that no one is left behind. They must have all the rationality, economic-financial, and political rationality that the new scenario demands.