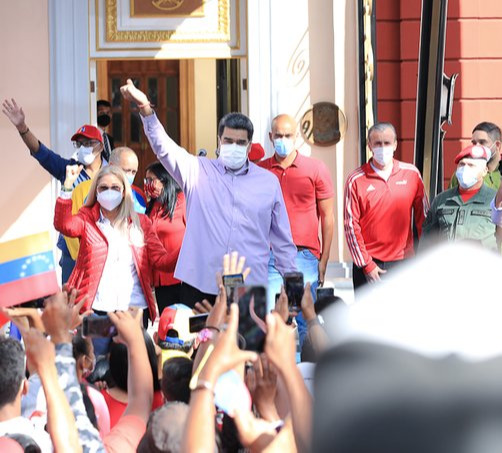 Venezuelan President Nicolás Maduro - in the framework of the people's loyalty march in commemoration of the 64th anniversary of January 23, 1958 -- asserted this Sunday that the people managed to defeat the White House's pretension of imposing parallel powers and now the country is on its way to a gradual recovery.

"From the White House, we had the information that a puppet president (alluding to Juan Guaidó) was going to be imposed in Venezuela to propitiate a military coup to control political power.  There the plan to impose a puppet on Venezuela was urged," recalled President Maduro.

At the same time, the Venezuelan leader indicated that the pantomime of the United States to impose Guaidó vanished and now the country is heading towards economic recovery.  "With the work and effort of all, we are in a gradual economic recovery.   This year has started well despite the pandemic," he noted.

"Constitutional justice sometimes takes time, but it arrives because it arrives, that is the demand of the people.  These are three years of imperialist aggressions that have harmed the people, but they are also three years of resistance of all.  They were beautiful years," the president emphasized.

In spite of the illegal economic, financial and commercial blockade suffered by Venezuela on the part of the U.S., President Maduro reiterated that the Bolivarian process does not lose its course and is getting stronger.  "I come to ask for support to promote with strength the new 3Rs of the Revolution: Resistance (popular, cultural and political), Renaissance (moral, economic and political), Revolutionize everything (go after the bureaucrats, reimpulse everything)."

"The fascists were defeated by a people mobilized in the streets.  We must not stop creating consciousness in the people (...)  We come from the workers' struggle, from the barracks and from Bolivarian thought.  All the struggles were united in a single project which is that of Simón Bolívar. All legacies and feelings were embraced in one name: Hugo Rafael Chávez", stated President Maduro.

"We have faced this pandemic with an efficient method, but it is true that COVID-19 is raging these days (...)  42 cases per 100,000 inhabitants, we have broken the record of daily cases, the Omicron variant is not more lethal, but it is still a coronavirus and we have to take care of ourselves," warned the president.

During his speech, Nicolas Maduro praised the efforts of members of his Executive and health personnel to combat the pandemic.   "We have reached 96 percent of vaccinated adults, which represents a record in the world," he added.

"We have to continue vaccinating children because it is safe (...)  Vaccines in the world are produced for children.  They are the ones who are prepared to carry protective vaccines," expressed the head of state.

In view of the massive vaccination against COVID-19 and the 7+7 method applied since the detection of the first contagions, the president announced that the flexibilization will be maintained so that the economic, commercial and academic activities in the country do not cease.