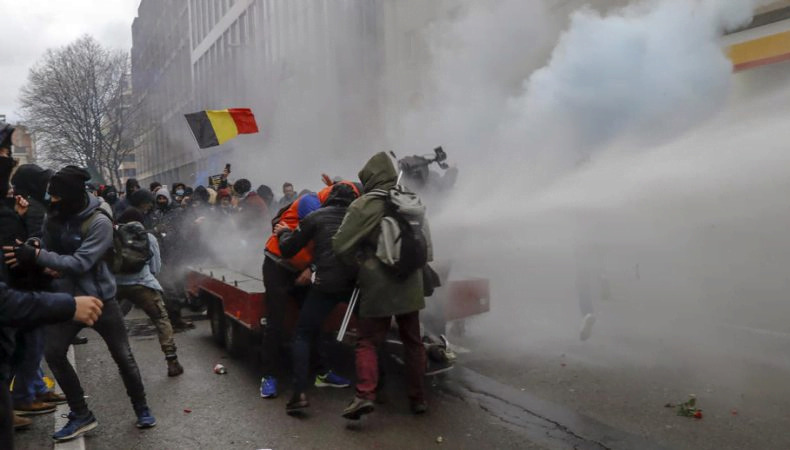 Police have fired water cannon and tear gas to disperse protesters near the European Commission’s headquarters in Brussels after a protest involving some 50,000 people opposing COVID-19 restrictions turned violent.

Although Belgium announced a slight easing of coronavirus restrictions on Friday, despite record infections, the government also said people must have booster shots after five months to maintain the COVID-19 passes which allow them to access bars or cinemas.

The passes, which are mandatory for anyone wishing to enter a restaurant, museum and many other public places, have sparked fierce opposition among some Belgians.

In scenes reminiscent of similar clashes last November, when about 35,000 protesters took part in demonstrations that started peacefully but later turned violent, some streets in the Belgian capital were soon filled with tear gas on Sunday.

Belgium is in the midst of a fifth wave of COVID-19 infections, with the peak not expected for at least a couple of weeks. Some 89 percent of adults in Belgium are fully vaccinated, and 67 percent have now also received a booster shot.

The protest comes as a wave of infections fuelled by the highly contagious Omicron variant of the coronavirus causes infections to reach record highs across Europe.  Organisers including the World Wide Demonstration for Freedom and Europeans United for Freedom had called for people to come from other EU states. Flags from Poland, the Netherlands, France and Romania could be seen in the crowd.

“What has been happening since 2020 has allowed people to wake up to corruption,” said Francesca Fanara, who had travelled from Lille in northern France.  “I have come to march together.”   “It’s a health dictatorship,” said Adolfo Barbosa from Portugal. “It warms the heart to see these people here.”

The EU’s health agency said on Friday that Omicron had now become the dominant variant circulating in the bloc and some neighboring countries.