Presidents of Cuba and Russia hold talks in the Kremlin 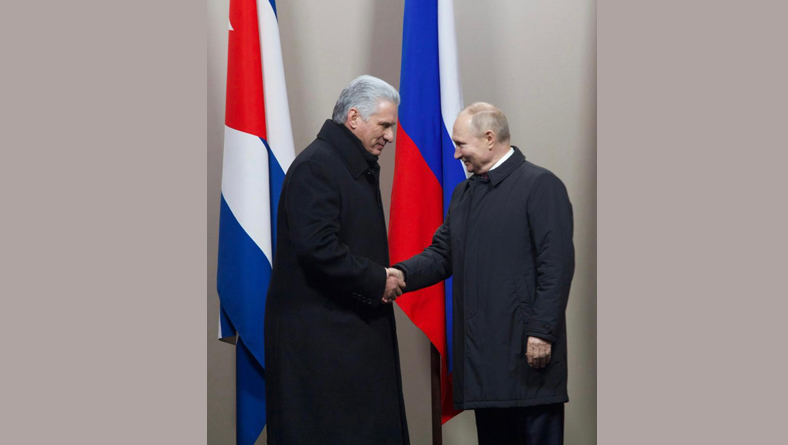 The president of Russia, Vladimir Putin, and Cuba, Miguel Diaz-Canel held an important meeting today in the Kremlin as part of the official visit of the Cuban head of state to the Russian Federation.

The two leaders discussed the current state and prospects for the development of the Russian-Cuban strategic partnership in the political, economic-commercial, cultural, and humanitarian spheres, as well as exchanged views on key issues on the international agenda.

During the meeting, President Diaz-Canel said he was convinced that the sanctions imposed on Moscow and Havana are unjust and arbitrary.

Later he said he appreciated all the work being done by the Russian Federation, the role it is playing, which Cuba supports, in seeking to change the world, to move towards multipolarity, and in that sense, Russia and particularly you, emerge as a leader.

Likewise, Diaz  Canel pointed out that both nations coincide in their points of view regarding the global problems that are affecting humanity.

"Once again, I want to reiterate that Russia can always count on Cuba," Díaz-Canel said.

We are going to do everything to continue strengthening and expanding our ties and bilateral relations," the Cuban leader emphasized.

For his part, the Russian president said that Moscow and Havana should move forward and strengthen their cooperation, taking into account the current situation, based on this solid foundation of friendship, adding that he was very happy to have this opportunity.

Putin stressed that first the Soviet Union and then Russia have always supported and continue to support the Cuban people in their struggle for independence, for sovereignty, as opposed to any kind of sanctions, embargoes, and blockades and Cuba assumes the same position concerning Russia.

According to Putin, this has to do with the friendship between the two peoples, established by the leader of the Cuban revolution, Fidel Castro, whom he considered a symbol of an entire era, of national liberation movements, of the fall of the colonial system and the creation of newly independent states.

The Russian president also asked Díaz-Canel to convey his best wishes to former Cuban President Raúl Castro.
Shortly before, Putin and Diaz-Canel inaugurated a monument to the leader of the Cuban revolution, Fidel Castro, in the square that bears his name, located in Moscow's Sokol district.

Díaz-Canel is making an international tour between November 16 and 27 that includes Algeria, Turkey, Russia, and China.