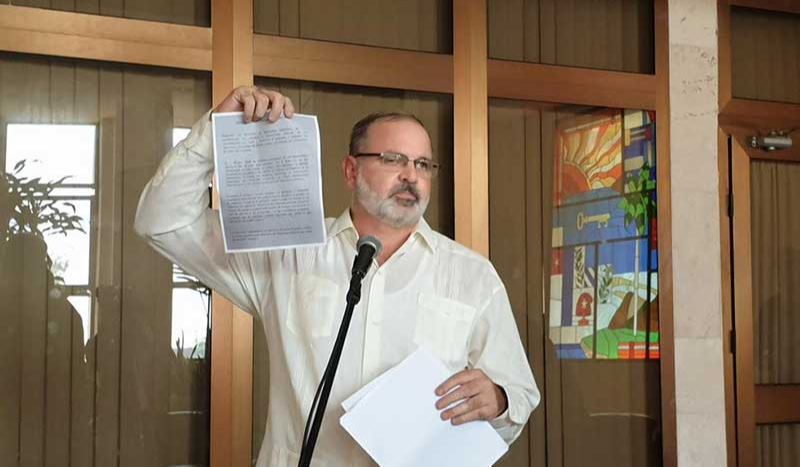 The pressures of the United States on third countries to incite condemnations against Cuba,  prove the desperation of the U.S. government in its crusade against the island, a diplomatic source denounced Wednesday.

The director for Latin America of the Cuban Foreign Ministry, Eugenio Martínez, blamed Washington as a fundamental actor in the fabrication of the conditions, instigation, and financing of the riots reported in the Caribbean nation on July 11.

In accordance with that denunciation, Foreign Minister Bruno Rodríguez released a copy of the 'joint statement' drafted by the State Department condemning Havana,  circulated among member states of the Organization of American States.

Through the social network Twitter, Rodriguez called on the U.S. Secretary of State, Antony Blinken, to recognize or deny the pressures he exerts on third countries for that purpose.

This document proves that the pressures are systematic and with little success, which leads them to despair, said the head of Latin America of the Cuban Foreign Ministry on the social network Facebook.

Working in the dark with coercion and few results, the United States seeks to add countries to its anti-Cuban crusade to generate instability, he said.

However, the minister added, 19 countries in Latin America and the Caribbean have demanded in the last five days the end of the blockade against the Antillean country.

The so-called 'declaration' calls for respect and freedom for the island people while omitting the vandalism reported during the riots.

The text 'demands' the Havana government to respect rights and freedoms and the release of the detainees.

However, it does not mention the campaign waged in social media networks to generate chaos, an operation that Cuban authorities themselves described as media terrorism organized from the United States with the involvement of the Government of Florida.