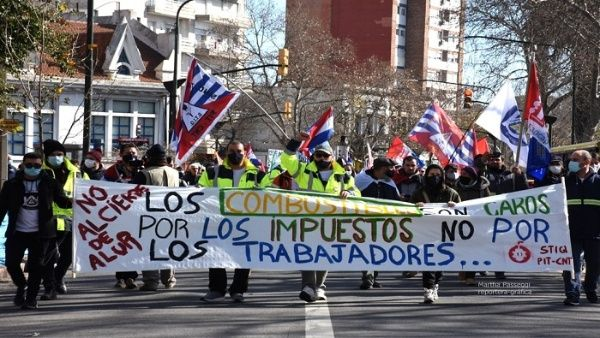 Thousands of workers of the Chemical Industry Union (STIQ) of Uruguay mobilized in the capital Montevideo against the plans of the Government of President Luis Lacalle Pou to dismantle public companies, in particular Alcoholes de Uruguay (ALUR).

During the protest action, STIQ affiliates warned of government steps leading to the closure of two ALUR plants, a biodiesel plant located in Capurro (a suburb of the capital) and a bioethanol plant in the department of Paysandú.

According to a statement from the union, this would imply the loss of 4,000 direct and indirect jobs.  Initially, the workers protested this Tuesday in front of the Capurro plant, from where they marched to the Legislative Palace.

During the protest, workers were supported by the Union of Officials of the National Administration of Fuels, Alcohol and Portland (Ancap).  According to press reports, the protesters received earlier, in the capital's Mártires de Chicago square, a group of workers who on Friday July 16th left in a caravan from Bella Unión (Artigas department) to Montevideo.

A leader of the STIQ, Nicolás Lema, explained to the local media a few days ago that the latest Rendición de Cuentas incorporates three articles which "remove the obligation on the part of Ancap to mix biodiesel in diesel and the obligation to produce biodiesel to mix with diesel".

In the opinion of this and other union leaders, this implies the definitive dismantling of ALUR, which would benefit the richest sectors of the country.

Lema pointed out that this industry is linked to the production of sugar cane and bioethanol, which makes it an important source of employment.

He added that ALUR has about 800 direct jobs, but reaches more than 4,000 when small and medium producers, transporters and other tasks related to biofuel production are added.

The general secretary of the Plenario Intersindical de Trabajadores-Convención Nacional de Trabajadores (PIT-CNT), Marcelo Abdala, considered that these mobilizations are focused on the defense of labor and also on national sovereignty, since the workers are betting on the productive development of the country.