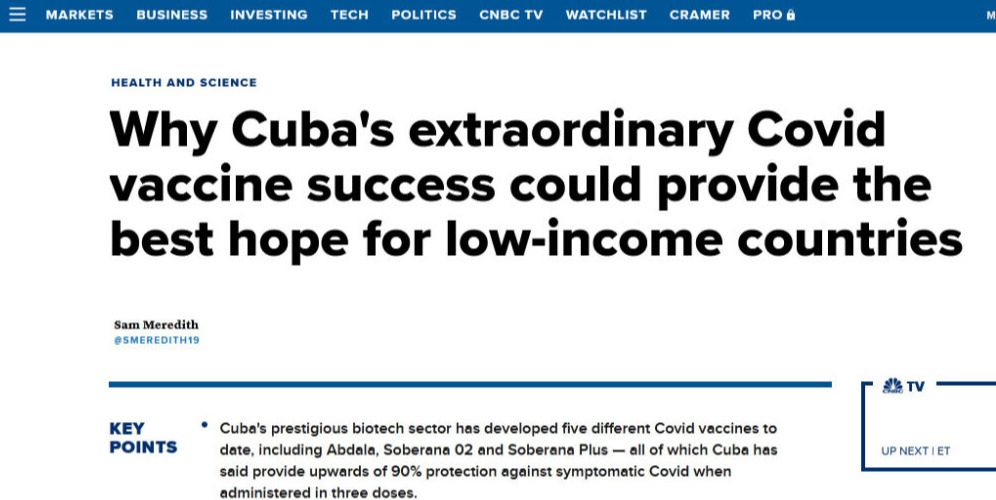 CNBC television channel on Thursday highlighted the extraordinary success of Cuba's Covid-19 vaccines and described them as the best hope for low-income countries.

In an extensive article quoting several international experts, the economic news channel noted that Cuba had vaccinated a large percentage of its population, an achievement that almost all of the world's largest and richest nations have yet to achieve.

The country of roughly 11 million remains the only country in Latin America and the Caribbean to have produced a homegrown shot for Covid, affirms the text.

"The tiny Caribbean island has achieved this milestone by producing its own Covid-19 vaccine, even as it struggles to keep supermarket shelves stocked amid a decades-old US trade blockade," it said.

It is an incredible feat that those of us who have studied biotech aren't surprised in that sense because it has not just come out of the blue. It is the product of a conscious government policy of state investment in the sector, in both public health and medical science, Helen Yaffe, a Cuba expert, and lecturer in economic and social history at the University of Glasgow, Scotland, told CNBC.

The article also notes that around 86 percent of the population has been fully vaccinated against Covid-19, including children from the age of two, and Cuban health authorities are rolling out booster shots in a bid to limit the spread of the highly transmissible Omicron Covid-19 variant.

For his part, John Kirk, professor emeritus of the Latin America program at Dalhousie University in Nova Scotia, Canada, said: "The sheer audacity of this tiny little country to produce its own vaccines and vaccinate 90 percent of its people is extraordinary.

Kirk stressed that approval of domestically produced vaccines in Cuba by the World Health Organization would be of "enormous importance" to developing countries.

The Dalhousie University professor pointed out that the Antillean country, unlike others or pharmaceutical companies, has offered to participate in technology transfer to share its experience in producing the immunogens.

"Cuba's goal is not to make a fast buck, unlike the multinational drug corporations, but rather to keep the planet healthy. So, yes, making an honest profit but not an exorbitant profit as some of the multinationals would do," he said.

On Wednesday, the Pan-American Health Organization (PAHO) highlighted Cuba's Covid-19 vaccination rates among the highest globally, while it also mentioned countries in the region such as Chile and Argentina.