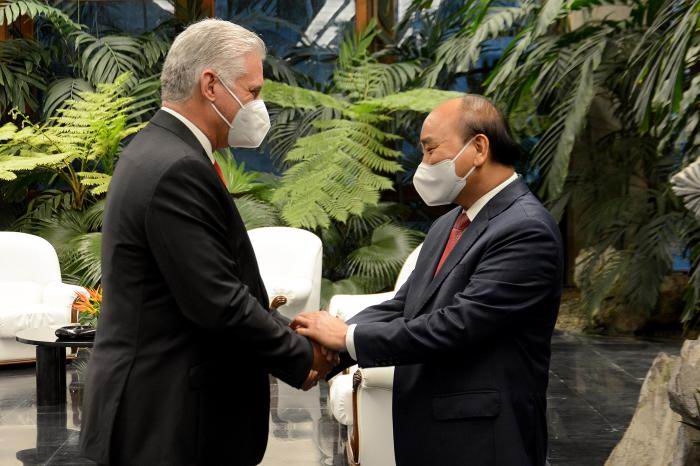 Vietnamese President Nguyen Xuan Phuc talks on Monday with representatives of Cuba's Mariel Special Development Zone and experts in the country's biotechnology area, during the last day of his official visit.

According to the agenda, the president will also pay tribute to historic leader Fidel Castro and National Hero José Martí in Santiago de Cuba (east).

The Cuban head of state, Miguel Díaz-Canel, and his Asian counterpart presided over the signing of several collaboration agreements in areas ranging from the economy, food industry, health, communications, among others.

Díaz-Canel also imposed the José Martí Order on the Vietnamese leader, the highest decoration awarded by the Caribbean nation.

During a ceremony at the Palace of the Revolution, Nguyen Xuan Phuc said he felt a great honor and strong emotion to receive this distinction and on behalf of his country expressed deep gratitude for the affection of the island.

He recalled that Cuba was the first state in the western hemisphere to establish full relations with the Asian nation and in this regard, he recalled the contribution of Fidel Castro and Vietnamese leader Ho Chi Minh to strengthen these historical ties.

He ratified the will to 'continue working for the transparent and exemplary ties of solidarity' that unite the two peoples, governments and communist parties.

In the context of his stay on the island, Cuban and Vietnamese institutions signed memorandums of understanding to establish partnerships in the field of vaccines against Covid-19 and the treatment of various non-transmissible chronic diseases.

Vietnam's Ministry of Health approved the import and use of the Cuban Abdala vaccine against this disease to be administered in emergency conditions.

The Caribbean island has two other drugs against Covid-19 produced domestically: Soberana 02, and Soberana Plus; as well as two other vaccine candidates: Soberana 01 and Mambisa.